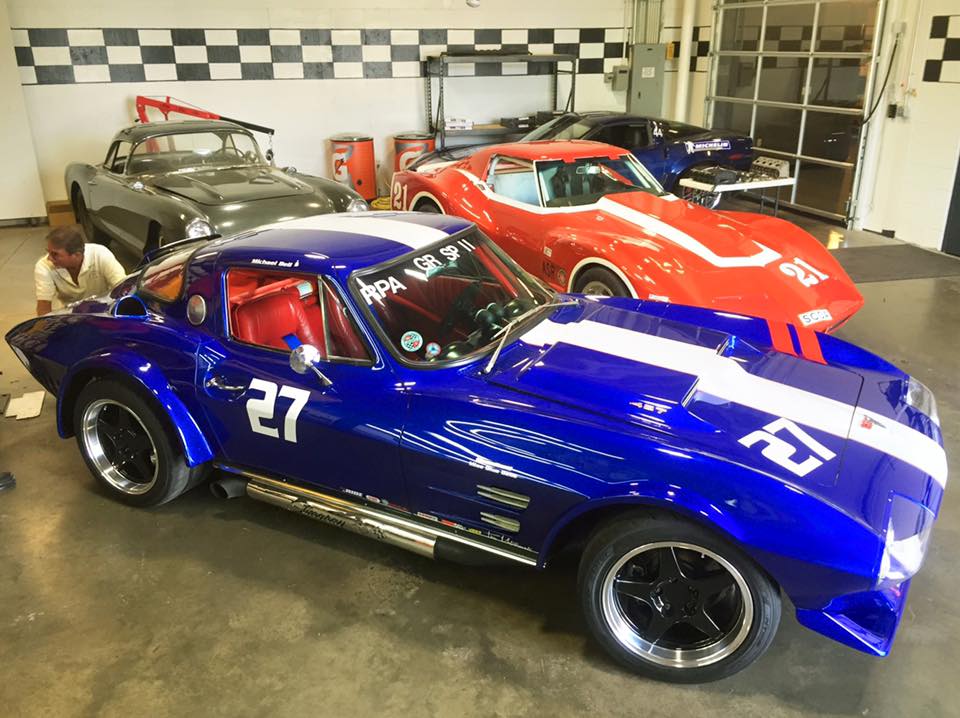 With most of the cars on display in the Museum on loan from private individuals, no two visits are the same. And on your next visit to the Museum you may notice two new racers to the display floor in the Performance Area.

The first is a gorgeous 1963 Grand Sport II Replica on loan from Michael and Jeannie Bell of Indianapolis, IN. The Grand Sport conversion on this car was initially completed in 2002 at Mid America Industries and the first owner of the car was Jim Prather. It uses a real 1963 Sting Ray body and chassis, titled with serial number 308375120339. The car originally had a 1996 GM LT-4 engine and 6-speed transmission. Painted Admiral Blue with red fender hash marks, a white center racing stripe and Torch Red interior, it pays homage to the 1996 Grand Sport.

Michael took the car completely apart and gutted it, installing a race engine – a 427 cubic-inch stroker Dart block with a 10.7:1 compression ratio that runs on 93 octane. It boasts 770 horsepower and has a T-56 6-speed. Other features of the car are a four-inch tube frame with a 1989 Z51 Corvette heavy-duty suspension, except for Alden coil-overs up front and VBP monoleaf rear suspension; Z26 Warrior slotted and drilled rotors and an 18-point roll cage. The car also has a custom, one-of-a-kind Holley induction system, a side-draft EFI with a MSD Digital 6-Plus computer system that plugs into a Dominator V2 vehicle management system.

The car has racked up too many accolades to name including Mid America Motorworks Celebrity Choice Winner in 2012 and 2014; Best of Show 500 World of Wheels in 2013 and 2015; Bloomington Gold Best of Show in 2015; NCCC 2015 Convention Concours Best of Show National Champion. It was in the December 2014 issue of Vette Vues magazine, and featured on the publication’s cover in July 2002. While the car is street legal and Michael does drive it on occasion, he has also tracked it at Pocono, the NCM Motorsports Park and other tracks for SCCA competitions.

Also on display in the Performance Area is an original 1969 Big Block, 4-speed coupe race car. It is #969 in the Registry of Corvette Race Cars. There is so much history on this car we couldn’t fit it all on the display readerboard!

In 1972, Randy Wittine (a Corvette Hall of Fame inductee), bought the car from a customer (Rudy Kreiter) of Jerry Pennington who ran a custom car shop in Troy, MI. Randy crewed for and designed all the paint schemes for the Owens Corning Fiberglass Corvette Racing Team of Tony DeLorenzo and Jerry Thompson (also in the Hall of Fame).

The current title for the car is dated May 26, 1972 and was notorized by Wilma Kreiter, wife of Rudy. The car was originally black. Randy added the FIA style fender flares, L88 hood, and Minilite wheels he bought from Tony DeLorenzo, subsequent to their use on the Owens-Corning Vettes. In 1973 Dr. Richard Bostyan (a member of the Daytona Beach Corvette Club who had become friends with the OC racing team in the late 1960s) bought the car from Randy. Jerry Thompson helped deliver the car to a former GM co-worker’s hot rod shop, Rudy Kreiter’s Buggy Works in Detroit. Rudy gutted the car, added the roll cage and racing seat.

In 1974 Doc drove up to Detroit and trailered the car back to his race shop in Daytona Beach. He rented a garage at the airport next to the speedway where he and some of his racer buddies (Jim Owen for one) installed a ZL1 motor and finished preparing the car to race in the SCCA AP class. Doc raced the car for the second half of the 1974 season in Florida with such great success he won the AP class in the SE Division. He took the car to the National Run-Offs at Road Atlanta that fall and blew up the ZL1 engine. In 1975 Doc ran a few IMSA Camel GT races including the November 30th IMSA Finale where he co-drove with Jerry Thompson.

In 1976 the car (#19) was run in the IMSA 12 Hours of Sebring, with Doc co-driving with Don Yenko and Jerry Thompson. Jerry qualified the car 7th on the grid, on the first lap of the race John Greenwood’s Corvette and David Hobbs’ BMW had an off-track experience, thereby putting Jerry into the lead for the first lap of the race. Doc tells of how Chris Economacky, the famous announcer, came down to their pit stall to see how this low budget, unknown team came to be leading the race overall. Eventually the car had some mechanical problems but still finished 31st. Later that year Doc won the Bilstein SCCA National race at Palm Beach.

In 1977 the car, running as #19, competed in the 12 Hours of Sebring with Doc co-driving with Gene Felton. They started 36th and finished 71st, only making nine laps. Doc and Gene Felton raced together again that fall in the IMSA Paul Revere 250 at Daytona. In 1978, running as car #20, Doc, Don Yenko and Jerry Thompson started in 15th at the 24 Hours of Daytona. They placed 50th with a DNF, completing 152 laps. Don, Jerry and Doc ran together again that year at the 12 Hours of Sebring, starting at 26th and placing 64th with another DNF, only completing 26 laps. Don over revved and blew the engine. Don bought Doc a new motor from Bill King Racing Engines (a builder of engines for the Owens Corning team). This same engine is in the car today.

Doc added the wide body flares and painted the car red, the running as #21 at Daytona in an SCCA race.

Skip ahead nearly two decades to 2009. Jerry Thompson is being inducted into the Corvette Hall of Fame and present are both Doc and Jerry’s son Chris. Doc’s car had been sitting idle in his shop since 1982, so a deal was struck and Chris purchased the car. A couple of days before the November 2009 HRS Fall event at Daytona Speedway Chris, his father Jerry, daughter Sara, long-standing crew members Al Trudeau, Mike Hurley, Steve, the infamous race car driver Michael DeFontes and Doc all gather at his shop in Daytona to finish prepping the car for competition. Jerry climbed back in the car after over 30 years and ripped it around Daytona’s high banks. He shared driving duties in the two hour HRS enduro with son Chris and Mike DeFontes.

In 2010, Jerry, Chris and crew cleaned and went through the car, preparing it for vintage racing. The car has a new ATL fuel cell bladder, the carb has been rebuilt, new Holley fuel pumps, all of the calipers have been rebuilt, all of the fluids have been changed, the radiator has been re-cored and the car is ready for historic racing.

In 2012 Kent Hussey purchased and contracted with Kevin Mackay to restore it. The car appeared at the 2014 NCRS National Convention and the 2015 Amelia Island Concours d’Elegance.

Thanks to all of the individual who graciously loan their prized cars to us! If you are interested in loaning your Corvette for display, please submit an application online here.