Two pieces from the ‘silver screen’ have made their way to Bowling Green, Kentucky – joining a special display in the National Corvette Museum’s Exhibit Hall. Fans of the Transformers films will recognize the iconic Corvettes, which are now part of the “Car-Toon Creatures, Kustom Kars and Corvettes: The Art & Influence of Ed ‘Big Daddy’ Roth” exhibit, which runs through December 2020.

Concept Corvettes offer an opportunity for designers to cut loose with their best ideas between generations of Corvettes. GM Design Chief, Tom Peters, always wanted to do a modern interpretation of the 1963 Corvette Stingray, and this was it. He made it silver and gave it the split window like the 1963, as well as the revered ‘Stingray’ badge.

Global VP of Design, Ed Welburn, liked where Tom was going with the design so much that he ordered a full-size working model of it to be built. Every detail was an opportunity for creative exploration, using carbon fiber, chrome, premium components and LED lighting. Even the engine cover was branded ‘Hybrid Stingray’ to point to future thinking.

When movie director Michael Bay went through the secret halls of GM one day looking for stars for the upcoming Transformers film, he liked the Stingray Concept so much that he created a character for it to play – renaming him ‘Sideswipe.’

Inspired by Ed Roth and his Rat Fink, Tom would go on to lead the design teams for the C6, C7 and the next generation mid-engine Corvette. The C7 debuted on January 13, 1013 to world-wide acclaim, and would later be chosen to star in the movie Transformers: Age of Extinction.

Based on a 2014 Corvette, this green movie-used car played the part of the adventurous paratrooper Crosshairs, fighting alongside the Autobots and Optimus Prime to defend the earth against the dreaded Decepticons.

The special exhibit is included with regular Museum admission. 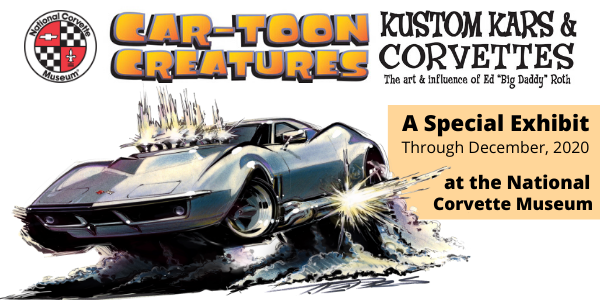