Symbols of appreciation come in many forms, from a simple verbal ‘thank you’ to a hand-written note to a random act of kindness. But for the family of a Nicholasville, Kentucky police officer the token of appreciation had a deeper, more heartfelt meaning for both them and those involved in the project.

The National Corvette Museum received a phone call in July, 2016 from Melissa Rhoads. Her husband, Burke, was an avid Corvette fan, having purchased a 1984 that he had slowly been restoring as time and finances allowed. He had promised their daughter, Jacquelyn, that she could take the Corvette to prom when she turned 16. Sadly, Burke was killed in a car accident while on duty for the Nicholasville Police Department in 2015 and the project remained unfinished.

“Our Executive Director, Wendell Strode, received a voice mail from Melissa asking for a recommendation of a shop in her area of Kentucky that could paint her late husband’s Corvette,” said Katie Frassinelli, Marketing and Communication Manager for the Museum. “We started researching by reaching out to the Bluegrass Corvette Club based in Lexington, and even asked around at the Somernites car show in Somerset, KY. With a project as special as this, you want to make sure the car is in good hands. At some point I thought – why don’t we at the Museum head up taking care of this car?”

The idea was pitched to other members of the management team with the thought that the project would symbolize the Museum’s support of law enforcement, not just in Kentucky but everywhere. “As a 501c3 nonprofit foundation we typically are not able to take on outside projects… but this was different,” said Katie. “We have always tried to extend our gratitude to law enforcement and military with various free or reduced price admission promotions – but to be able to translate that appreciation into a physical act of kindness was very meaningful for our team.”

Having a prior relationship with PPG Automotive Refinish, the Museum pitched the company about the project and they were happy to come on board with a donation of Bright Red paint. “We also reached out to Final Finish in Morgantown, KY to see if they would donate their services and paint the Corvette for us. Their team is not only a member of the Acre Club at the NCM Motorsports Park, but they also re-painted the Museum-owned GS-90, so it was natural to approach them. We wanted Jacquelyn to have a nice-looking ride for prom, and I’m sure her brothers will look forward to the day they also get to drive it,” said Katie.

“We were more than happy to do this for them. I have two daughters, and my partner and brother Chase has a son and daughter. I hope this makes their lives a little happier,” said Eric Ingram of Final Finish. “We wanted to make sure her daddy would be proud of that car.”

The next step was to call Melissa and make the offer for the Museum to take on the project. “It was the best feeling in the world to tell her that we’d love the opportunity to finish what Burke started. Especially because she didn’t expect it,” said Katie. “To be able to lend our expertise and take one small thing off her plate was very rewarding for our team.”

Melissa delivered the Corvette to the Museum in August and was welcomed with applause and cheers from staff members. “Burke was very hands-on with his Corvette. He even went to the upholstery shop to learn how to stitch the seats so he could do that himself,” said Melissa. “It would be different if we had money and he bought everything, but we got to see him work on it. I knew how much of his own time he spent on it, and I always knew how things were going by the amount of cussing,” Melissa said with a laugh.

After going over the car in person with Melissa, it was discovered that Burke had purchased several parts for the Corvette that had yet to be installed, and there were a few issues like leaky windows that needed to be addressed. Museum Vehicle Maintenance and Preservation Coordinator Daniel Decker took the project under his wing and spent the next few months working on it as time allowed.

“It was obvious after looking at the parts Burke had purchased that he was taking the time to do it right,” said Daniel. “We wanted to finish what he started, and have a safe, reliable AND nice looking Corvette to present to the family.”

With donations and contributions to the project from Corvette Central, Auto Zone and Midas, the car was well taken care of inside and out. Additional expenses incurred on the project were graciously covered by Museum and Bluegrass Corvette Club members, Sonny Bates, Ken Gray and Steve Hill.

“Melissa had presented us with patches from Burke’s uniform – two police department emblems and one with his name,” said Katie. “An idea was presented to stitch an emblem and his name patch to the center console cover inside the Corvette. We thought this final touch would mean so much to the family and truly completes what has become a tribute to Burke and police officers everywhere.”

The car was revealed to the family, friends and Corvette enthusiasts visiting the Museum as part of the Michelin NCM Bash on Saturday, April 29, 2017.

“I can’t express my appreciation and thankfulness for everything,” said Melissa. “Words can’t convey the emotions that I feel about what you all have done for us.”

We at the National Corvette Museum are honored to have played a role in this story, and sincerely thank both the Rhoads family for trusting us to take care of such a special car – and those who donated their time, talents, supplies and funding to the project. We’re all looking forward to seeing Jacquelyn driving her dad’s Corvette to prom next year and are sure Burke will be looking down and smiling! 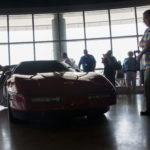 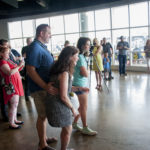 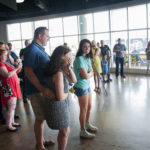 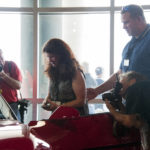 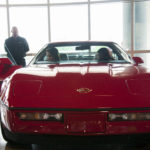 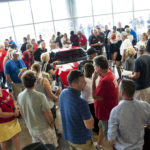 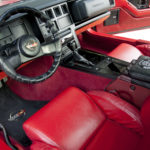 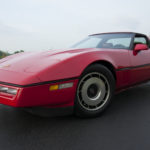 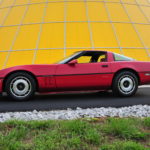