For 21-month-old Emmalyn, being a Corvette enthusiast is second nature. “Emmalyn loves seeing our Corvettes, and if she is outside with them, she wants to get in them,” said grandfather Jeffrey Fry. According to Jeffrey, even if there are other cars out there, she only wants in the Corvettes.

Jeffrey recently videoed his granddaughter wiping down his Corvette. “She went and picked up the towel herself and started cleaning it. No one told her to do this.”

Jeffrey and wife Brenda of New Braunfels, Texas owns a 2011 Grand Sport and 2014 Stingray. “If she sees Papaw working on his car, she will bring me tools, or get tools and work on her toy car.”

According to Jeffrey, she loves seeing his car pull up. “I’m starting her off young. She’ll be a future Corvette owner if I have anything to do with it.”

Check out a few photos of Emmalyn hard at work cleaning the C6, as well as the video clip by her Papaw. 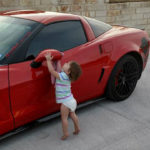 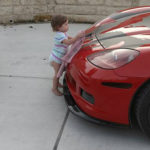