The National Corvette Museum has teamed up with Tom Peters, retired Director of Exterior Design for the 8th Generation Stingray Corvette, to put together a new exhibit: Car-toon Creatures, Kustom Kars and Corvettes: The Art and Influence of Ed “Big Daddy” Roth.

“Ed Roth was one of Tom’s biggest artistic influences growing up,” said Bob Bubnis, Museum Historical Media Coordinator and lead Curator of this exhibit. “Back in the 1950s and ’60s, kids who liked cars bought hot rod magazines along with t-shirts, models, stickers and toys from Roth Studios. They featured caricatures of cars with giant smoking slicks and fire coming out of the exhaust, with blown engines and cartoon monsters at the wheel. Tom would begin copying those drawings, and in the process, he learned about how to draw cars with personalities and attitudes. The monsters were just cool. The most notable one was Rat Fink, who will serve as the mascot throughout this exhibit.”

After a photo op with a giant Rat Fink statue, the tour will begin with a re-creation of Ed Roth’s garage. In addition to being a cartoonist and t-shirt designer, Roth was a car constructor and pinstriper, with many of his cars on loan for the exhibit. Thanks to Roth car collector and President of Galpin Motors, Beau Boeckmann, guests will be able to see the Orbitron, Mysterion, and Tweedy Pie, as well as Ed’s personal truck that he would use to do his pinstriping work from. On loan from The Petersen Museum is The Outlaw, and from the National Automobile Museum in Reno, Nevada is Beatnik Bandit.

A journey through the exhibit will take visitors through a 1960s toy store where they can see the vintage toys that sprang from Roth’s imagination. See everything from key chains, sticker collections, statues, and of course, model kits. Millions of models were sold to kids like Tom Peters, fueling the passion for cars. Roth’s silkscreen shop with the actual equipment he used to make those t-shirts will also be on display.

The Museum is bringing in cars from builders who were inspired by Ed Roth, such as the Iron Orchid built by Dave Shuten, Gary Reid’s Bubble Ray Corvette and a Rat Rod. This part of the exhibit showcases the personal takes enthusiasts have had on Roth’s work. 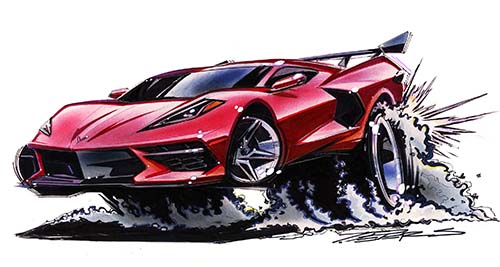 The exhibit will feature other surprises along the way, with the tour ending featuring a re-creation of Tom’s studio at the GM Tech Center, along with one of the Corvettes he designed from the Transformers movies. To face off with that Corvette, we’re also going to have a special car on loan from Galpin Auto Sports–their new Galpin Ford GTR1 supercar. The cars, together, dramatically show how Ed Roth influenced the automotive world as a whole. The match-up is especially fitting as Roth’s t-shirts often played on the rivalry between Chevy and Ford. “Ending the exhibit like this seemed like the perfect homage to his legacy,” added Bob.

“Anyone from that era will love taking a trip back through time to see these cars and artifacts together in the same place,” said Bob. “In addition to that though, we will be introducing Rat Fink and his gang of crazy creatures to a new generation. There will be lots of friendly monsters throughout the exhibit to keep young people entertained. I can see grandparents bringing their grandchildren and sharing their stories from that important time in history. Maybe they’ll even want to buy one of the models they built back then to put together now.”

A major part of our Museum’s mission is to offer experiences that fall in line with S.T.R.E.A.M. curriculum. Using touch screen monitors, videos of Tom Peters, GM staff and Galpin Auto Sports will show school groups how Science, Technology, Robotics, Engineering, Art and Math all come together to make these amazing cars. The exhibit is aimed at encouraging young people to discover what they are good at and build upon those skills with an education that they can take to the workplace. The touch screens will go back to a tour experience aimed more at adults between school visits. “It’s all very exciting and innovative,” said Bob.

“Sadly, Ed isn’t with us anymore, but his wife, Ilene Roth, has given us her enthusiastic blessing to make this happen. She is working with us to bring together lots of artifacts such as Ed’s art supplies, his tuxedo, antique toys, and even some things that have not been seen by the public ever. She is also planning to host a special ‘East Side’ version of the Rat Fink Reunion here in Bowling Green, KY, bringing together licensed Rat Fink artists and the cool people and cars that celebrate the legacy of Ed ‘Big Daddy’ Roth,” Bob added.

Visitors won’t have to be into the Kustom Kar scene, Rat Rods, Rat Fink or Transformers to enjoy this exhibit. “We are making it a walk-through time, when John Kennedy was the President, The Ventures were on the radio, and gas was 20 cents a gallon. Maybe along the way we will inspire some young people to start thinking about where they will take the automotive story from here.”

Read About the Exhibit Opening

Read About the Transformer Corvettes on Display 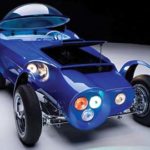 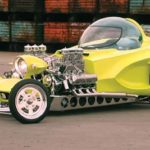 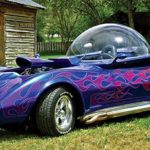