For many people, their Corvette becomes a special part of their family. Fun times are had in the car, and it is a placeholder for many fond memories. Such is the case of the Alexander family’s 1979 “Corvette Red” Corvette.

The car originally belonged to Kenny Alexander, but after finding an SSR he wanted to purchase, he needed to find a home for the Corvette to make room in the garage. He told his brother, Doug, about his dilemma. “I said, ‘every boy needs one, and I’ve never had one.’ So I bought it off of him in 2009,” said Doug. Sadly, that same year Kenny succumbed to cancer.

Fast forward to 2016 and Doug, along with his wife Kay, are moving. “I had nowhere to keep it. I could never sell the car because it’s always going to be his. I couldn’t give it to anyone because they wouldn’t appreciate it like we appreciate the Corvette,” said Doug. “I came up with this wild idea in July about donating it to the Corvette Museum, and since that time our families got behind it, so it’s become a family memorialization to my late brother, Kenny Alexander.”

When Doug delivered the car to the Museum it had a large stuffed Wile E. Coyote in the passenger seat.  The front license plate (Kenny’s from Ohio) reads “WLE KIOTE” while the rear tag reads the same, but is Doug’s Alabama tag.

“Wile E. Coyote came about because in his early stages of cancer, Kenny had a lot of ups and downs like all cancer patients do, and some of his buddies gave him the nickname Wile E. Coyote because you get knocked down and you just keep getting up.”

Kenny’s wife, Sue, donated a large stuffed Wile E. Coyote to the Museum as well, “I’m honored, absolutely honored, and he would have been thrilled,” she said.

Museum Executive Director Wendell Strode was on hand to welcome the family and accept the keys to the Corvette. “It really reflects the people side of what our mission is all about… in preserving the past, present and future of Corvette and Corvette enthusiasts,” said Wendell. “It was a special day for the Museum, and more importantly a special day for the Alexanders. It’s a great way for us to continue our mission and for Corvette and car enthusiasts to see this Corvette and learn about its story.”

Watch a video of the Alexander’s 1979 being delivered below. If you are interested in learning more about how your legacy can live on through a car donation, please contact Connie Russell at 270-467-8815 or . 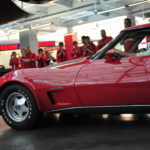 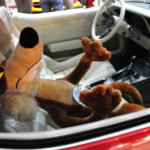 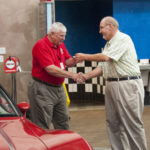