When it snows and your Corvette is nicely tucked away in the garage, but you really miss it, what do you do? Well, if you are Stan Gullett of Andover, MN you build a full-size snow Vette to look just like your beloved 1980 orange Corvette. After a snow on Friday, January 8, he and his 5-year-old step-daughter Keira worked on the snow car sculpture that evening until dark  – and since then, the masterpiece has been shared on their local Fox tv station’s Facebook page and gained a lot of attention.

Stan’s C3 is the second Corvette he’s ever owned, the first being a C4 he bought three years ago as a project car, but later sold so he could focus his search for the perfect C3. Purchased in July, 2015 for only $2,500 on Craigslist, the previous owner had bought the car 12 years prior without even knowing if it ran, and with plans to restore the Corvette. “The owner had millions of pictures of cars he had restored, with C3 Corvettes being his top priority. I was the first person to call him off Craigslist, and after that he had people offering him $3,000 for it. The guy looked at me and said, ‘I want you to have this Corvette. After many years of dealing with them, something tells me this one is for you.’ He’s a great guy, and always asks how the Vette is going. It’s been a fun, great car!”

Stan towed it home, added the distributor that was noticeably missing, turned the motor over by hand and it fired right up. He was able to drive it, all original, for a few weeks until things started dying from the car sitting for so many years. “First the tranny started slipping, then the motor got an oval lifter, so that’s when it went in the garage and I started having some fun for a few months, searching for parts on eBay, Craigslist, and even a guy’s house that was like a Corvette Museum!!”

The Corvette was completely disassembled, all the way down to the frame and Stan began fixing it up. “I went through the whole entire thing, everything except removing the frame, which was in great shape so I found no need to replace it. It has a new motor, new transmission, new rear diff and suspension, new front steering, new rims, all new custom interior.”

Stan said he has a total of $6,700 in the car now, and is quick to give credit where credit is due. “I couldn’t have done it without the help from the C3 Corvette Group, Bob McCaughtry, Don Parkhurst, Bruce Martin, Joe Crawley… I’ve bugged them for months with questions! And they loved answering every single one. They are compassionate Corvette owners.” His new found friends have even planned some meet-ups and road trips together this year.

When asked if he will get his Corvette out this winter, Stan laughs. “I will never drive it in the snow! Ha! Although, I will take it out for a few pictures and drive it for a few miles when the road is dry every chance I get. I’m very excited for spring.” Stan has never been to the Museum but said Corvettes have been his favorite car since he was a kid. “When the sinkhole happened, I felt like I needed to take that day off work. It was a very sad day to see that happen. Visiting the Corvette Museum is definitely on my bucket list!”

We hope we can help Stan cross that off his bucket list this spring after he gets his car back out and have invited him and a friend to join us for our kick-off for Corvette season, the NCM Michelin Bash April 28-30. Thanks to Stan for sharing his passion. The snow Vette definitely brought a smile to our faces! 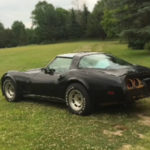 The original 1980 Corvette when Stan purchased it. 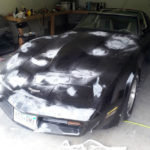 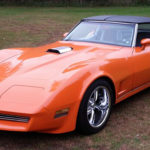 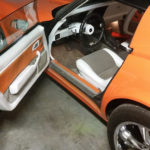 Working on the interior. 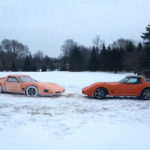 The Snow Vette and 1980 Corvette 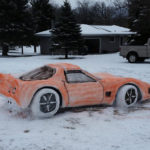 Way better than a snowman.