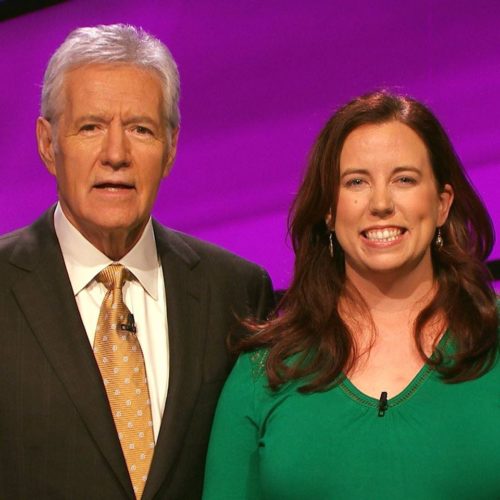 For Lauren Michniacki, Corvette have always been a part of her life – so it was only natural that when she competed on Jeopardy, she give a shout out to the iconic car and Museum.

“As long as I can remember, he’s [dad, Joseph] always had a Corvette. [When I was] growing up he had a 1984 C4. Every year around by birthday they would take a photo of me with the car. When you first announced that you were opening the Museum – he has been a pretty life-long Corvette fan, and classic cars in general, he decided he would join as a founding member of the Museum and bought a brick.” Joseph later traded in his 1984 for a 2011.

Lauren grew up in Michigan, and with family in both Nashville and Knoxville, a stopover at the Plant and Museum with her dad was convenient when they were traveling to visit. “We visited a couple of times, did the factory tour once or twice. I haven’t been in a long time but he’s been since the sinkhole.”

“Growing up, I was in love with your Corvette pinball machine in the lobby, and you could play it. I would play it a lot. My favorite display Corvette in the Museum was the Mako Shark. I just loved the paint, the body style. If I could have one, that’s what I would want. Of course, when I was a kid I didn’t realize it was one-of-a-kind.”

After eight years of trying to score a spot to compete on Jeopardy, Lauren finally got her chance. “Mother and I always watched Jeopardy when I was growing up. I was pretty good at it.” According to Lauren, the process is very in-depth. “The first thing you have to do is an online contestant quiz that they issue once or twice a year. You take it – like 50 questions – and only have 10-15 seconds on each one, so not enough time to Google the answers. Then you have to wait. Next is an in-person audition. They called me for that in 2015. And then you have another quiz. They do a personality interview to understand who you are going to be on the show on camera. Then there is a mock game with a board and buzzer. They want to see if you are comfortable and confident answering questions. And then, another waiting game. During this time, you are active in their database for a year and a half. If they don’t call you, you have to start the process all over. My year and a half was about to expire in December, 2016 when they called me in the fall of 2016 and asked me out to California where it shoots before it airs. We filmed the show at the end of 2016.”

Lauren was sent a sheet with question prompts by the show’s producers, including asking for her top five stories. “They know what makes for interesting stories… have you met anyone famous, have you traveled anywhere, family mementos, family stories.” This is where Lauren’s Corvette Museum brick story popped up. “They narrow it down, and then they ask you to tell the story like you are talking to Alex, and then they let Alex pick. He could go with whatever he feels like when he walks up to that podium. One of the producers said ‘oh, I love that story. I’ve been there.’ And he had a 2000-something Corvette.”

Watch the video clip below to see Lauren competing on Jeopardy, and her plug for Corvette, the Museum and our brick program!

Brick purchases are considered tax deductible contributions to the Museum, and bricks are available both at the NCM Motorsports Park, as well as inside and outside of the National Corvette Museum. They are a great way to commemorate a special occasion, date, Corvette, person, a memorial, or other recognition. Click here to see the sizes and options available.