A collection of murals depicting scenes from the Holocaust will be on exhibit at the National Corvette Museum March 1 – March 15, 2018.

The 18 murals were created by students enrolled in Nazi Germany and the Holocaust during VAMPY, a summer program for Verbally and Mathematically Precocious Youth. Held by The Center for Gifted Studies, the camp brings together gifted and talented seventh through tenth graders from across Kentucky, the country, and the world for three weeks of learning on Western Kentucky University’s campus.

Nazi Germany and the Holocaust has been taught by 2017 Kentucky Teacher of the Year, Ron Skillern, since 1992. The course chronicles the rise and fall of the Nazi Party, focusing on its use of propaganda and the danger of being a spectator in the face of atrocity. Skillern incorporates a variety of interactive projects, including the mural.

When displayed together, the murals make an impressive impact, said Julia Roberts, the executive director of The Center for Gifted Studies. “This mural exhibit is artistic as well as haunting in its messages,” said Roberts.

The National Corvette Museum is open daily from 8 a.m. to 5 p.m. CT. More visitor information, including admission rates, can be found at corvettemuseum.org.

The Center for Gifted Studies at WKU (wku.edu/gifted) serves gifted children, their educators and parents through educational opportunities, professional development and a variety of other resources and support. 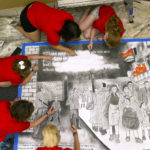 Students put the final touches on the 2015 VAMPY Holocaust mural on the last day of VAMPY, July 10, 2015. (Photo by Sam Oldenburg) 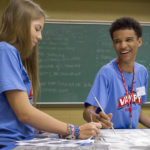 Lauren Simons (left) of London, Ky., and Malcolm Jones of Louisville paint the 2016 VAMPY Holocaust mural Friday, July 15, 2016. More than 350 students have taken part in the Nazi Germany and the Holocaust course since it began in 1992. (Photo by Sam Oldenburg) 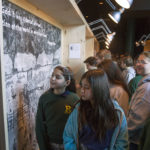 Students examine the VAMPY Holocaust murals during an exhibition at The Kentucky Center for the Performing Arts in Louisville. The murals were displayed in conjunction with performances of the play “And Then They Came for Me: Remembering the World of Anne Frank” throughout the month of February 2016. (Photo by Sam Oldenburg)