If you have an iPhone or iPad and use iMessage on iOS10, there is now a new, fun digital toy for you! Digital-art designer Kevin McCauley has rolled out a new Sticker Pack application currently featuring 27 Corvettes.  The app, called Automoji: Bowling Green, can be downloaded from iTunes for only 99 cents.

The app does not work in the same way as true Emojis, and is not found on the Emoji keyboard. Instead it’s called ‘Automoji’ because it was created by an Emoji artist and the illustrations are modeled after the Apple iOS Emoji visual style. Once the app is downloaded, from within iMessage tap the App Store icon (looks like an “A”), then tap the four dots in the corner. The icon for Automoji will appear (or if you’ve not yet purchased it you can tap the “+” to open the App Store and make your purchase). Once you tap the Automoji icon you’ll see Corvette stickers you can scroll through and select. Note that your recipient must also use iMessage to be able to receive the stickers.

“I had done a set of Porsches a few months ago and it got a great response,” said Kevin. “I was amazed by how much people engaged and wanted to see their own cars in the set. People seemed to connect with it. I got a lot of requests to do other makes of cars, but Corvettes felt natural to me. The model designs clearly lend themselves well to illustration, and since there are seven generations, I have a shot at covering all the historic models and variants. I guess I am a completionist in that sense!”

Kevin said it took him about two to three weeks to illustrate the initial group of cars, but as he was about to submit it to Apple, he decided to do the C3-bodied car from Mad Max Fury Road, which delayed him a bit. I think we can all agree with Kevin that it was worth the wait and turned out great!

“Choosing the cars was fun – I knew I needed to have all the generations and facelifts represented. Then I did some special editions, race cars, a couple pace cars and most of the performance models.”

According to the Apple description, the new Automoji: Bowling Green celebrates over 60 years of the iconic American sports car, illustrated in the style of iOS emojis. Every generation is represented, and includes Pace Cars, racing models, movie cars, and high-performance variants — even the National Corvette Museum’s 1992 “One Millionth” Corvette, which fell victim to a 2014 sinkhole but has since been restored.

“I feared it would be seen as being in poor taste to do one of the cars from the sinkhole, but so far people like it. I mean, it’s such an astonishing piece of automotive history!”

Kevin even accepts suggestions for new emjois, which can be submitted through his website. You can check out the initial compilation of Corvettes below. 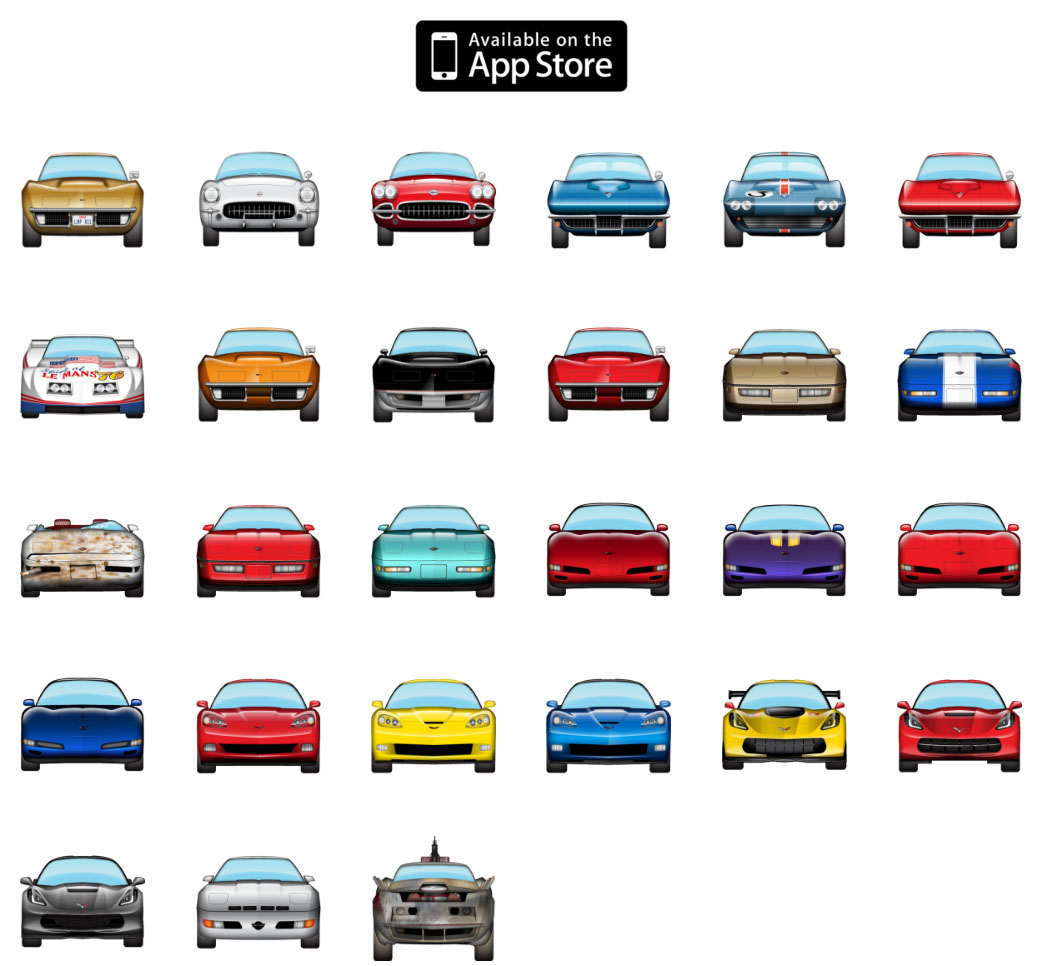