A A+
HomeExploreExhibitsCorvette Cave In Exhibit

The National Corvette Museum made international news headlines on February 12, 2014 when a sinkhole collapsed in the Skydome of the Museum in the wee hours of the morning. Thankfully, no one was in the building when it happened, but security cameras were rolling to catch the incident on camera. Museum visitation skyrocketed that same year as people from around the world were drawn to witness for themselves the destruction Mother Nature had caused. Though the sinkhole has since been filled, the story continues to draw attention.

A new exhibit opened February 12, 2016 (the two-year anniversary of the sinkhole) to tell the story of what happened that day, why it happened, what cars were affected, how they were recovered, what karst landscapes and caves are, how the building was fixed, and much more. Learn more about the elements of our exhibit below!

Explore the Sinkhole and Cave
Discover what lies below the floor of the Museum’s Skydome with this 3D interactive tour. Use your mouse to explore the cave below, or if you have a VR headset, click the goggle icon in the bottom corner after starting the 3D showcase. For help troubleshooting your VR goggles, use this link.

The Day
This portion of the exhibit explores what happened on February 12, 2014. While the story made international headlines and many remember seeing security footage of the Corvettes falling into the sinkhole, some may not be as familiar with the story. A panel briefly gets visitors up to speed, with one screen looping the security footage and another playing media clips from the day.

Media Coverage
Corvettes are eye-catching, even when they lay mangled in the bottom of a 30 foot sinkhole. The story swept the nation and abroad – and  this section covers some facts about the media coverage as well as several clips from cable documentaries to prime time national news outlets.

Pop Culture
An unexpected result of the sinkhole was the amount of interest on social media, from tens of thousands of shares, to hilarious memes and parodies, to a growing interest in the Museum. This section of the exhibit delves into the pop culture sensation the sinkhole became.

Cars Affected
“Some tears were shed,” is how Museum Executive Director Wendell Strode described the news of eight Corvettes falling victim to the sinkhole. This panel provides photos, videos and facts on each of the cars, as well as an interactive “before” model of each Corvette. An illuminated acrylic case illustrates precisely where each car fell into the hole.

The Recovery
The recovery of the Corvettes from the sinkhole was no easy task! While you can see short video clips and photos of the process within the Cars Affected section, you can get behind the controls of a crane at our interactive game within “The Recovery.” Guests of all ages will enjoy digitally recovering all eight cars and putting them safely in their garage bays.

Karst Landscapes
For much of the country, the idea of caves and sinkholes can be interesting, and sometimes scary. For residents of South Central Kentucky they are a way of life. This section gives a deeper look at what lies beneath our feet. What exactly is karst? How are caves formed? What kind of sinkholes are there? Am I safe? We even have a few samples of rock formations from our cave – including one that took tens of thousands of years to form!

What It Took to Fix the Sinkhole
One of the most common questions is, “Is the hole filled?” Yes, it is, but it was quite the engineering feat to do so! This section illustrates just what went into filling the sinkhole with an illuminated acrylic case showing each micropile that was installed in the ground. Read about some of the engineering involved in the process and why our Skydome is now one of the safest spots sitting on a cave, then watch a quick time-lapse video of the process! Interact with our responder wall, twisting and turning the digital image of the cave to see just how big it is while reading a few interesting facts about its size. Then, check out our live webcam feed from inside our cave! We’ve even hidden a few Corvette parts that you can search for by panning, tilting and zooming the camera.

The Grand Finale
Ever wonder what it might be like inside a cave, when suddenly it starts to collapse? Sounds a little scary, right? Well, for a safer experience, venture into our mini cave for a virtual simulation of a collapse. Once its done you’ll exit into our Skydome to continue your tour. While you wait for the simulation to begin, enjoy our trivia kiosk just outside the “thunderdome” to test what you’ve learned throughout the exhibit.

The Actual Cars
Your educational journey through Corvette Cave In will lead you to our Skydome where all eight of the “sinkhole Corvettes” remain on display. See the two Corvettes restored by General Motors, as well as the other six cars that look just as they did after being rescued from the sinkhole. We have one car left to repair – the 1962 Black Convertible – which will undergo repair in our new Maintenance and Preservation Department.

Look Below the Surface
At the edge of the sinkhole Corvette display you will not want to miss our 48″ manhole that leads into one side of our cave. During the sinkhole repair process we were able to add the manhole to provide us access to the cave, and you can peer into the window to see the floor of the sinkhole, over 30 feet down! This passageway then slopes down into the cave, providing some interesting terrain under the surface!

This special exhibit provides a little something for everyone. For Corvette purists who just can’t bear reliving the sinkhole story, a bypass door is available leading straight into the Skydome and Exhibit Hall areas. But take it from us, you won’t want to miss this cool, interactive display! 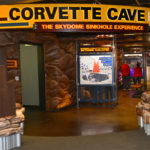 Welcome to Corvette Cave In – The Skydome Sinkhole Experience! 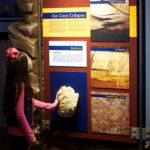 Learn about how caves form and even check out some sample rocks. 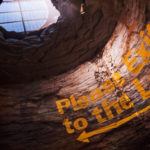 You won’t want to miss the grand finale of the exhibit – nicknamed the “thunderdome” it will give you a taste of what the sinkhole collapse was like. 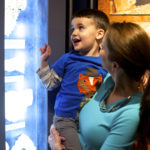 Check out actual rocks from the cave, including crystals that are tens of thousands of years old! 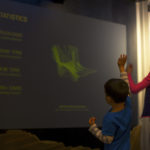 Spin the 3D model of the cave while reading facts and statistics. 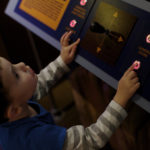 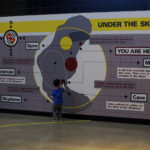 Get a feel for where the sinkhole was and where the cave is beneath your feet. 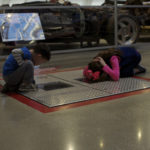 Peer into the 48″ manhole to see the bottom of the Corvette cave. 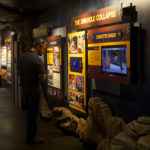 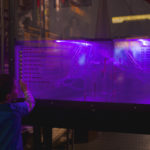 See exactly where each Corvette fell into the sinkhole with this scale replica. 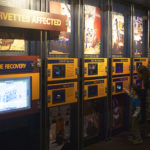 Learn about each of the eight Corvettes swallowed by the sinkhole. 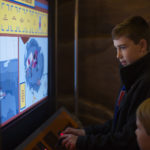 Rescue the Corvettes from the sinkhole with this digital crane game.