By Bob Bubnis with photography courtesy of Richard Prince/Chevrolet

When I congratulated Corvette Racing Program Manager, Doug Fehan, on virtually clinching the driver and team championships, he cautioned, “We’re not there yet.” While not particularly superstitious, Doug has been a key player in the racing world long enough not to tempt fate. His formula for success that gives half of the credit to good fortune, and splits the balance with equal parts of great team and great car, has proven itself out over the course of this racing season. In light of that, he prefers to save his victory speech for when it is official, and keep good fortune on his side.

Still though, short of the competition hijacking the transport carrying the #3 car, the only goal yet to achieve is securing the Manufacturer’s Championship at the Petit Le Mans coming up on October 7.

For members of the National Corvette Museum who receive our America’s Sports Car magazine, we publish articles like this with Doug Fehan regularly, giving fans the inside scoop on the races. To get his view on all of the races in the 2018 season of IMSA racing, go to our website at corvettemuseum.org and follow the membership links. In the meantime, here’s a sample of one such article…

Following up your victory at Virginia International Raceway, what was the mindset going into Laguna Seca?
We knew that we didn’t have the pace to run up front. [Editor’s note: This is due to Balance of Performance adjustments handed down from IMSA, to keep dominant teams from dominating.] The reality of the race was that we needed to finish ahead of the #66 Ford. That was our primary objective. Anything beyond that would be the frosting on the cake. This dictated our entire strategy.

We made a tire choice that we knew would not benefit us at the start of the race, but thought that as the stint wore on, that the race would come back to us, which it did to some degree.

Along with that we had a fuel strategy that we thought would get us down to the last hour when we’d make a pit stop that would take us from the back to the front.

It’s undeniable that Corvette Racing is well-regarded as being master strategists, and the best of the best in the pits. Television commentators never fail to mention it when they cover your races.
This is something we work hard at. Every person on the team is driven and committed to winning in whatever discipline they are a part of. Back at the shop the pit crews compete to get better, while engineers are looking at every piece of data they can to find a competitive advantage. Think of how many components there are to a race car including the human components, and then the other factors such as weather and track conditions. Coming up with a race-winning strategy is a monumental challenge and has always been critical to our success.

Case in point: Kyle Millay, the engineer on the #3 car, did a magnificent job. He was monitoring the entire race and saw a car going off into the gravel trap and knew a yellow flag was coming out. We were positioned in such a way where we could make it into pit lane before the pits were closed. We did that. At that point in time, I think we were running in 7th, but came out in 2nd.

We were in the closing stages of the race. By then we had also made some improvements to the car. We weren’t able to run with the leaders, but we were able to run at a pace that would make it difficult for anyone to pass us.
We took our fourth-place finish, finishing ahead of the #66 Ford, and put ourselves in a position to wrap up the Team and the Driver Championships.

Great car, great team and good fortune have all come together for the #3 car, but the sister car has only had two of those three factors on its side.
Unfortunately for the #4 car, on the first lap, the two BMWs got together. Oliver Gavin had to brake heavily to avoid that me-lee but the GTD Lamborghini behind him didn’t. He punched Oliver in the rear and broke the rear diffuser. It held on but there is a tremendous amount of air moving under the vehicle which was detrimental to Oliver’s ability to control the car. The visceral things like sound and the vibrations that were being generated from it caused us to just bring the car in, so through no fault of their own, they were not a factor in this race. That’s just how racing works.

At the end of the day though, we put ourselves in a position to win two of the Championships, and now we are looking forward to seeing if we can run the table and defend our Manufacturer’s Championship as well. With this being the last race of the season, it is going to be a battle no Corvette fan will want to miss. Come see the race live if you can, or support the series by watching it at home. The broadcast schedule is on IMSA.com. We plan to make you proud to be a part of the team. 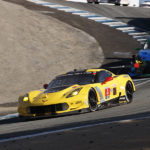 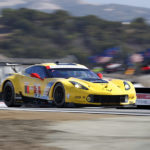 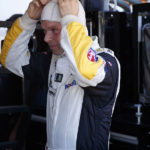 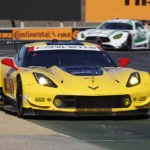