Elizabeth “Libby” Smith of Garrison, KY has her uncle to thank for her love of Corvette. And her parents have Corvette to thank for keeping Libby on track! A college student at Morehead College in Kentucky, Libby’s parents told her if she stayed in school, kept her grades up and graduated, they would get her a new Corvette.

“My parents were not car people,” said Libby. “My mother and daddy knew they had to dangle something in front of me – they’d say, ‘we have to keep her going!’” Libby laughed.

Even in high school her parents knew how to keep Libby focused. “I was going steady pretty heavy, and thought about getting married,” she said. “My parents thought they better get me a Vette. The 1973 is what I traded in on this.”

Libby shared it was her uncle George who got her hooked and remembers when he brought a 1962 home. “I was about six years old and I remember him taking me for a ride and shifting gears. He said, ‘Now this is a REAL sports car Libby!’ We always had something in common with Corvettes. People used to ask me ‘what are you going to be when you grow up’ and I’d say, ‘I’m going to work and get me a Corvette!’”

Libby ordered her 1977 in October of 1976 from Larry Fannin Chevrolet in Morehead, Kentucky. “I got to pick all the options. With the ’73 my parents wouldn’t let me get the big motor, a 4-speed or convertible. This one is the L-82 and 4-speed. The convertible wasn’t offered that year. I got the gymkhana suspension slipped in because my parents didn’t know what it was,” Libby laughs.

The car arrived February 4, 1967. “The detail guys were prepping the car, and I told them to leave the plastic on it, that I was getting seat covers made.” With Libby’s car having white interior, she knew she’d have to do something to protect it. “I’m one of these people that covers everything. I had seen peoples’ cars with white seats that were dull looking and dirty.” She picked out a white velvet that could be removed and washed, and her friend made custom seat covers for her ’77, which have remained in use ever since. “I still have the plastic over the chrome and stainless buttons so it wouldn’t smudge.”

Libby’s care for her car paid off, earning NCRS Top Flight with a score of 96.8. “They counted off on the paint chips – but this is the original paint. It has not been painted, only the usual maintenance and a fan belt replaced.”

Libby remembers the year she was student teaching, and a yearbook photo of the teachers was taken by her Corvette. “One of the teachers, I saw in the photo, he sort of leaned against it. I tracked him down and said ‘You were on my car. You stay off my car.’ Everybody knew not to bother the car,” Libby chuckled.

Despite its pristine condition, Libby’s car is anything but a garage queen, as she used it as a daily driver while student teaching, in the snow and rain too! A teacher for 27 years, she is also known to have a bit of a lead foot. “I used to get drag racing tickets on the street and I’d have to go to my Uncle George to get money to pay the tickets.” Libby also was well known at the Clay City Raceway, where she competed in drag racing and was known as a ‘dark horse’ – with people who were in the know winning money on her races. The owners of the track would call and cover for her with her parents. “Every time I brought home a trophy, I had to leave it with someone else. My parents didn’t think I needed to be racing.” Eventually, those trophies made their way back to Libby though. “When I got my first teaching job, I was able to rent a house. So, I had to go track down my trophies to bring with me!”

It was that love for her car that led Libby to choose the National Corvette Museum as its forever home. “I’m single, I have no children. I do have family, but I know it would be an inconvenience for them to take care of it. I’ve been to the Museum several times, including when it opened. I’ve always been a strong promoter of it. If I was going to put my car some place, I’d want it to be where it would be appreciated, viewed and taken care of.”

Thank you to Libby for entrusting the National Corvette Museum with your beautiful car! 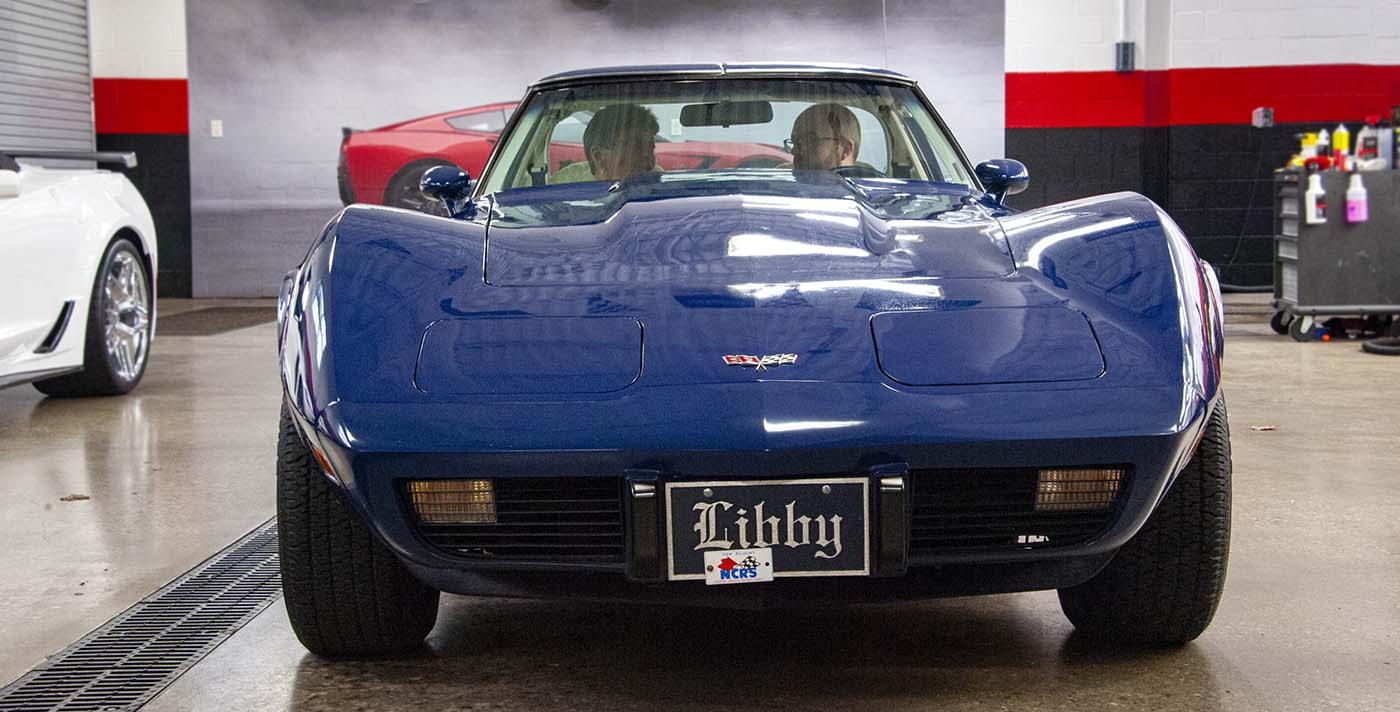