For Abbie Watt’s 4th birthday, her grandfather, Tim Watts, had the perfect gift. As the owner of a 1963 Nassau Blue Corvette he wanted to share the hobby with his granddaughter, so he purchased her a 1963 Riverside Red battery operated Corvette. The only question was – how to present the gift to her in true Corvette fashion? As members of the National Corvette Museum, Tim and Debbie had heard of the R8C Corvette Delivery Program and the NCM Experience Program, so they contacted the Museum to see if something similar could be done with a child-sized Corvette.

On Saturday, August 20, 2016 the family traveled from Hendersonville, TN to present Abbie with her gift. Joining them in celebration were Abbie’s aunt, mom, dad and little sister. With her name in lights on Corvette Boulevard, and signage declaring the miniature collector car as hers – Abbie was presented with her iconic American Sports Car. Just like the models 54 years later that dot the Museum’s Boulevard, waiting to be picked up by their new owners, Abbie’s Corvette was driven out of the Museum in style, down Victory Lane, pausing for photos which illustrate that owning a Corvette really is Living the Dream.

Maybe we’ll see Abbie again in 12 years for an upgrade in Corvette size (hint, hint Grandpa)! But for now, we know her little sister is anxiously anticipating her turn to pickup a pint-sized Corvette at the Museum. Thank you to the Watts family for making Corvette memories with us!

Check out a video of Abbie’s experience at the National Corvette Museum below. To book your child’s special delivery, please contact Kellie Steen at 270-467-8852 or . 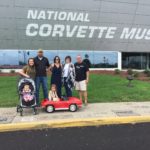 The Watts Family pose for a Delivery photo. 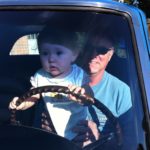 Abbie Watts with grandpa Tim in his 1963 Corvette. 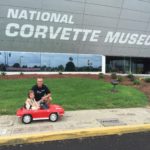