How old were you when you first fell in love with Corvettes? And how old were you when you actually purchased your first Corvette? For Thomas Fogel – he’s just five years old and has checked the latter of the two off his list. And no, it’s not a PowerWheels! Thomas’ Corvette story starts with a Corvette Classifieds listing on Facebook for a 1976 Coupe, red with red interior. It was late January, 2015 and the car was listed in Silver Springs, Florida. The seller had an asking price of $2k OBO and the car had been sitting for 21 years. Thomas’ dad, Lee, saw the car and commented on the post, “All that I said was ‘That’s a great project. Wish I could swing it.’ And thought nothing more.”

At the time, Lee, who works as the Director of Performance Excellence and Digital Media for Zimmer Chrysler Dodge Jeep Ram, wasn’t seriously looking for a car, “I was just kinda thinking out loud, ya know? I figured something like that would be fun to build together with my son to give him someday. But we were in no kind of position to even fathom this.”

Three days after stumbling upon the car, Lee was contacted by the seller. “He said that he felt that the Lord was telling him something, and he wanted to speak with me. So I call a few days later (and after a few more messages on Facebook) and we spoke on the phone,” Lee recalled. “He said he felt that God had compelled him to give me the car and pay forward a similar kindness done to him over 40 years ago in a similar situation with a Corvette that HE was gifted. He said he prayed on it, and spoke to his wife and they agreed that my son and I should have this car. I cannot explain it… and I’m just reaffirmed that God always has a plan.”

Lee and two of his closest friends, Dennis and Wayne, and Wayne’s son, Jacob rented a truck, borrowed Lee’s uncle’s trailer and headed south to Florida from Walton, Kentucky. “It was a 30-hour banzai kind of trip!” Lee said. They headed out on Friday at 5:40pm, drove through the night, arrived at Silver Springs, FL at 8:10am Saturday morning and then came back at 2am on Sunday morning.

Thomas’ ride is an L-48 automatic with Firethorn Red deluxe leather interior. The car was originally code 13 – Silver, and Thomas wants to repaint it ‘the right color.’ Lee says the car does have some water damage on the inside and the L-48 was replaced with a roller-block 305, but that looking underneath it there is not any frame damage or rot. “We now have an LO5 350 we are putting in, along with a Holley carb and intake my closest friend has given us. The gent who sold us the front clip also sold us a set of headers, and gave us a factory dual exhaust for it. We located a partial front clip but still need a few pieces (drivers side headlight, grill and front bumper cover). The interior will have to be gone through and cleaned up, but our plan right now is to get it running over the winter.”

This is the first C3 for the Fogels, but not the first Corvette to grace their garage. Dad, Lee, has his own story behind his beloved 1988 Corvette. “I ran across my ’88 sitting on an old rollback next to US 25. I checked it out and the owner had it marked at $4K OBO. It was a stick and was basically all there. They had pulled the TPI off and tried a carb’ed setup that had failed. He told me the block was cracked. I already had a ’92 L05 350 sitting in the garage on an engine stand. A few bits and pieces from my old ’84 Z51 are on the ’88, so that’s cool. I wanted a manual and the ’88 is my favorite year of the C4.”

Lee’s car is a base coupe, DNE 4+3 transmissions, low options, grey leather interior and built June, 1988 in Bowling Green. He’s hoping to get the engine on his car up and running again. “My engine is being installed at Cincy Speed in Cincinnati, Ohio. They are installing the engine and mating the exhaust to the headers, and then bringing her back home for me to complete.” Lee says its friends like Nick and Craig at Cincy Speed, and even his wife, son, mom and other friends who have supported his project and helped him along the way.

Enthusiasts like Lee help ensure Corvettes are around for future generations to enjoy, giving new life to old vehicles. Lee’s parents are also Corvetters, owning a 1962 Roman Red. “I guess you could say I’m passing on the legacy to my son.”

Lee says the family plans to visit the Museum this spring. “My son is VERY proud of his Corvette and that he works on it (and on daddy’s Corvette). He’s already challenged me to a race, LOL!”

We hope one day that Lee and Thomas will attend a Museum event together, with Lee in his 1988 and Thomas in his 1976 (Bash 2027, anyone?)! Thanks for sharing your Corvette story with us, Lee, and for passing on that passion to Thomas. 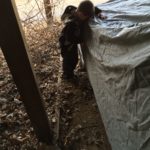 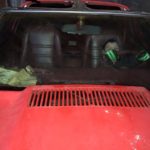 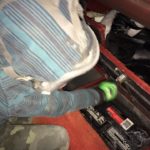 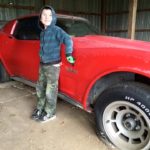 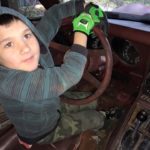 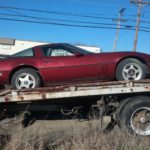 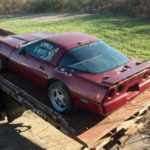 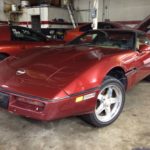 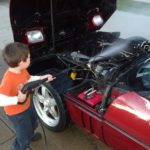 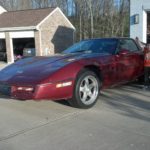 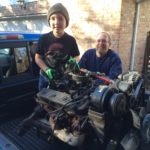 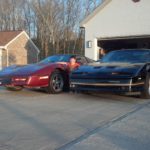